The writer Michael Hobbes had an excellent thread on housing and homelessness the other day:

As Hobbes continues to say, “Every American city that sees a boom in incomes and employment also sees a spike in homelessness. Our deranged housing policy has made equitable urban growth a thing of the past.”

The relationship is indeed causal. The poster children for the current housing crisis in America are precisely those cities where high amenity construction and an influx of college-educated workers has not been followed by sufficient homebuilding – San Francisco, Boston, New York and Austin; to a lesser extent Los Angeles and Seattle too. With no other alternatives, these new high-income workers bid up the existing housing stock – this is the gentrification process – and research by Zillow has found that future increases in homelessness is well-predicted by what comes next, i.e, increases in average rent. While the natural solution to an increase in the demand for housing in a place is to increase the supply for housing in that place, the issue has instead festered and spawned a kaleidoscope of groups all pushing their own solutions, each with a worse tradeoff than the last.

In a classic case of strange bedfellows, some NIMBYs and pro-homeless activists have pointed out that in fact there is no housing crisis, since the national housing stock is more than capable of housing the unhoused, with there being more vacant homes than homeless people. This is true, but subject to an obvious critique: since extra houses in Detroit can’t be moved to Culver City, the only option remaining is to move some of the people out of the crowded cities into these extra homes. And while there are thoughtful approaches to this (like pursuing geographic redistribution as a tool of federal policy), more often than not proponents of this approach end up advocating for a deep and modern form of segregation.

As it happens, the mismatch of homes and jobs is not a uniquely American problem. China, amid its stomach churning rise to middle-income, has been groaning under the weight of a similar problem for decades. I want to compare the restrictions on mobility imposed by local control of zoning in the US with the top-down system used in China – the hukou, which is a form of census and identification strategy that maps each Chinese citizen to a region and determines their eligibility for legal residence in other regions. Obviously, hukou is a rather more domineering way to control the movement of a population. But the effects of local control of zoning are no less severe; rather remarkably, the natural whims of homeowners in Marin County and the Upper West Side have come to align with the technocrats at the CCP.

It was only by 1920 that the US would become a majority-urban nation; today about 80% of Americans live in cities. The late 20th C. suburbanization is evident to see in the below chart as a break in trend, as is the great return of the millennials to cities after 2008; to a first approximation, however, it’s easy to see that urbanization followed a linear trend up for several decades before slowing at higher levels.

The Chinese have taken a much more volatile path to urbanization.

In 1949, the Communist Party took power in a country that counted 60 million urban residents, a mere spearhead compared to the 450 million living in the countryside.

Early on, they established the hukou, or “household registration” system, a tool of the command economy designed to help the party manage the vast Chinese population. Hukou were used to designate where residents would receive government benefits, like healthcare, schooling for their kids, and work eligibility. They came in two flavors, rural and urban, and while changes to hukou status were nominally allowed, in practice they were exceedingly rare: maybe something like 1% of all rural holders could have converted to urban status each year.

Hukou shaped Mao-era policymaking. As the Dear Leader’s focus swung from rural collectivization to leap-frog industrialization and then back to iconoclastic civil struggle in the late 1960s, holding an urban hukou was tantamount to a stay of execution – 19 in 20 deaths during the Great Chinese Famine were of rural hukou holders, as they were expected to feed themselves with the surplus remaining after CCP authorities had collected their grain targets, while urban residents received (meager, but reliable) state rations.

Even after the death of Mao and up through the 80s, modern megalopoli like the Pearl River Delta were agricultural, still covered in “rice paddies and water buffalo,” as one urban studies scholar puts it. Shenzhen changed all that. Amid the raft of economic reforms which opened up special economic zones from 1979 onwards was a crack in the armor of hukou that allowed for rural merchants to legally bring their business to cities distinct from their own.

Further reforms in 1992 would open more benefits and a form of legal residency to migrant laborers in a few cities; yet more reforms in the early aughts would finally tear down the rural-urban distinction, replacing it instead with a “regional” hukou. Those reforms have basically worked: 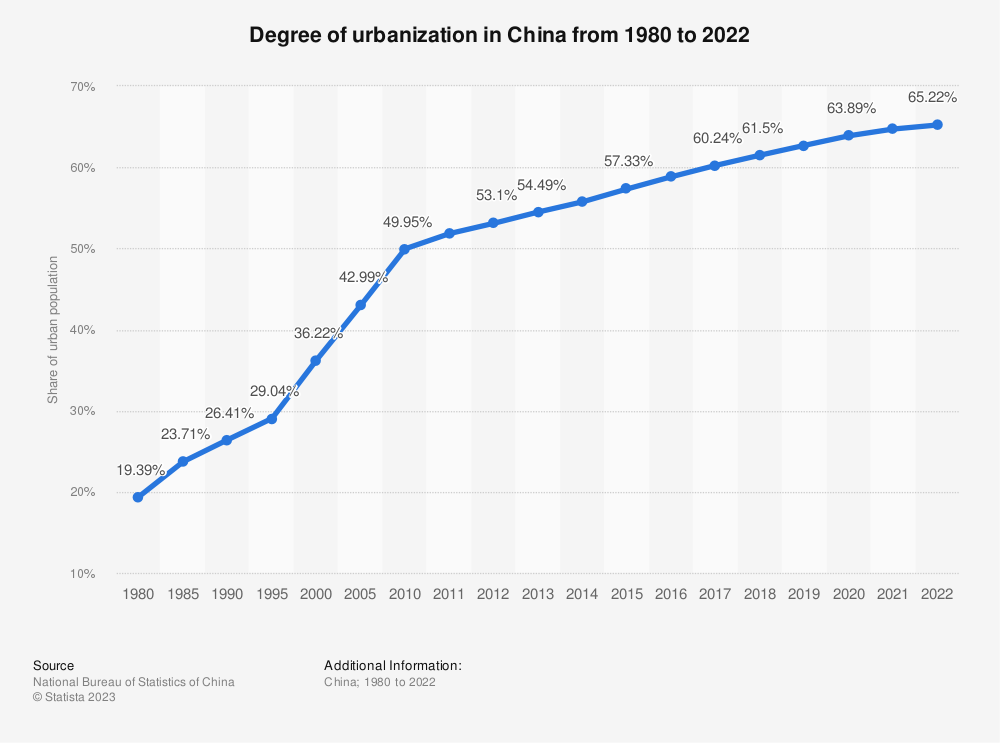 By the mid-2000s, poor farmers in the Chongqing hinterlands had it well within their rights to cast down their plows and pick up factory tools – but only in Chongqing. They couldn’t leave behind the farm as easily for one of the dynamos like Shenzhen, Shanghai, or Beijing. And therein lay the rub.

This development has important implications for individual behavior and the study of urbanization more broadly. If, say, rural productivity in 1969 was equal to an index of 25 on the chart, then even someone moving to the poorest CSA at that time – New Orleans, LA – could have expected to nearly triple their personal income.

By contrast, say rural productivity was again at 25 for 2019, then someone moving to the 100th-richest CSA, Lexington KY, would only expect to double their income. That 2019 mover has to get all the way to Minneapolis to triple their income like the person who moved to the Big Easy in 1969.

Put simply, while the returns to urbanization were rather uniform in the mid-century, the distribution has skewed in our day. All urbanization is no longer created equal and the restrictions which prevent workers from moving to San Jose and Seattle and NYC and Boston are a club to the kneecap of broader American growth.

Two clever economists advanced this argument a few years ago and did the legwork too; they found that the increase in GDP from ending restrictive housing regulations and allowing greater mobility was astronomical – from 1964-2009, the total increase in GDP would’ve been +36% higher than it was in reality, worth an extra $3.4tn in 09 dollars (Hsieh & Moretti, the authors of that study, corrected an error caught by the economist Bryan Caplan, which had actually underestimated the theorized effects by something like $2tn dollars!).

Of course, for all this to work you have to believe that the increase in income inequality between cities has actually come along with a decrease in mobility to those rich cities. But that does seem to be the case – as above, we noted that these richest cities are ground zero for the housing crisis, places where housing costs are so high not only as to deter all the potential newcomers who don’t have FAANG RSUs as part of their compensation, but also to actually evict present residents!

The real economists have weighed in on this for a while too – the impacts of lower mobility are at the core of Tyler Cowen’s Complacent Class. Davis & Haltiwanger (2014) found rates of job relocation fell by a quarter going into the 90s, while Molloy et al. (2011) declared internal migration to be at a 30-year low.

The Chinese economy has been no less susceptible to this phenomenon. The mid-aughts hukou reforms which got rid of the urban/rural split brought in new dividing lines, this time in the form of regional boundaries. This has caused its own chafing issues as poor rural residents want the gains from income possible in Shenzhen & Beijing and impossible in their local tier 3 urban area. Filmmakers like Jia Zhangke, who have made it out to the coastal superstar cities, pay testament to these inequities – the lives of a group of miners in remote Shanxi province are depicted in A Touch of Sin as being all sound and fury, bitter cold and hard labor for meager wages.

It’s no wonder that, as The Economist found in 2020, the smallest Chinese cities are actually seeing their hukou-compliant populations fall. Rural hukou holders have a certain “reservation” status, similar to job-seekers in a labor market, below which they will prefer to retain their rural status and forgo the social benefits of registration in the city in which they work. Xi Jinping, who wrote as a student about tinkering with hukou, has pushed a new initiative to spruce up these smaller towns and cities, with little word back on success.

Hukou today, as The Economist has it, is a game of three tiers: you’d love to but can’t get into Shanghai and Beijing, you’re ok with and can get into Chengdu and Xi’an, and you don’t even want to get into small cities like Dawan or Wuwei.

NIMBYism on the Pacific Rim

Nowadays the arguments for keeping strong hukou distinctions are weaker than ever. Faced with four years of Trumpian jousting, COVID-19, and a burgeoning demographic crisis, the party under Xi has been more and more active in tinkering with the rules and allowing for more migration, a strategy once referred to as adding a “new engine for the slowing economy”.

Where opponents of liberalization usually stake their claims is in arguments about the cost of providing for all those newcomers. In a very telling discussion, Fei-Ling Wang, a professor at Georgia Tech, describes the modern pressures on the reform camp:

Resistance to any proposed major reform now, ironically, comes from the urban people – not ironically, but expectedly I guess – and not necessarily from government planners. Government planners are hoping to speed up urbanization even in large cities so the economy can get a new driving force. However, urban officials, the local cadres, see this as compromising their current privilege. They see the rural folks as coming in to share their fruits. The urban-rural difference in China is horrendous – living standard, income, education, medical service, you name it. This great gap really makes the urban folks feel they are privileged and wonder why they should share the scarce resources with country folk. The local officials also worry about it [hukou reform], as it may get local people really angry or create a management issue.

Fei-Ling Wang, quoted in The Diplomat

There we have it – Chinese NIMBYism made flesh. What in the end distinguishes the ideas of those who were there first, either in China or the US, from those who would like only the chance to share in the fruits of high-productivity economies? Very little, except for a commitment to keeping the rest of us all a little poorer.

For Walkability and Good Transit, and Against Boondoggles and Pollution

22 / 7
denesbilurdan
For the Love of Paris

“To study in Paris is to be born in Paris!” ― Victor Hugo, Les Misérables

Down and Out in Buda and Pest
The Daily Post

The Art and Craft of Blogging

The latest news on WordPress.com and the WordPress community.